The Importance of Proof of Ownership of Apartment Units 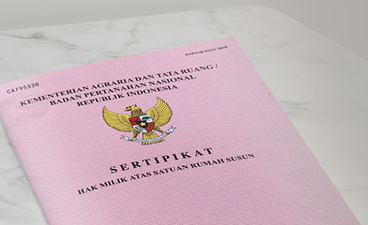 By law, Indonesia only recognizes the term rumah susun for flats of apartment. Apartemen is a terminology that is absorbed from an English terminology Apartment. From a legal point of view, rumah susun or apartments refer to the same thing and there is no difference between both terminologies.

The definition of rumah susun is regulated in the provisions of Article 1 point 1 of Law No. 20/2011 on Rumah Susun. This regulation refers to rumah susun as multi-storey buildings built in an environment that is divided into functionally structured parts, both horizontally and vertically, and are units, each of which can be owned and used separately, especially for a residential area equipped with shared parts, shared objects, and shared land.

As an owner, a person must be able to prove that he or she is the person who legally owns the satuan rumah susun (sarusun) or apartment unit. For this reason, every prospective apartment unit buyer must be aware of the importance of securing the proof of ownership of the apartment unit.

Proof of ownership of this sarusun or apartment unit  is regulated in Articles 47 and 48 in conjunction with Article 1 paragraphs 11 and 12 of Law No. 20/2011.  Based on these articles, the legal proof of ownership of the apartment unit recognized by law is the Certificate of Ownership (Sertifikat Hak Milik or SHM) and/or Certificate of Building Ownership (Sertifikat Kelayakan Bangunan Gedung or SKBG).

Based on the provisions of the articles above, a person can be said to be the owner of an apartment unit, if that person has secured a SHM or SKBG of the apartment unit

The Circular Letter of the Supreme Court (SEMA) of the Republic of Indonesia No. 4 /2016 stipulates that the transfer of land ownership based on the Sale and Purchase Binding Agreement (PPJB) legally occurs if the buyer has paid the land price in full and has occupied  the object of sale and purchase that was carried out in good faith.

With the provisions of the SEMA, the transfer of ownership from the developer to the buyer occurs when the PPJB has been signed and the buyer of the apartment unit has paid in full for the object of the building.

Basically, the use of PPJB as proof of ownership of an apartment unit is not uncommon. Moreover, the issuance of SHM and/or SKBG for condominium units generally takes quite some time.

In the event of an ownership dispute involving the owner of an apartment unit, PPJB can be used as proof of ownership. However, it has the potential to become a problem if the developer of the apartment building is in a state of bankruptcy and insolvency.

When a company is declared bankrupt, all of the debtor’s assets will be included in the bankruptcy estate (boedel pailit) based on Article 21 Law No.  37/ 2004 on Bankruptcy and Suspension of Payment Obligations.

The second problem is related to the issuance of SHM and/or SKBG. To get proof of ownership, the owner must sign an AJB with the developer. However, if the developer is in the state of bankruptcy and insolvency, the developer  cannot take any legal action on its behalf, including the signing of the AJB.

Based on the explanation above, it can be concluded that based on SEMA a person can be considered as the owner of an apartment unit  if that person has signed the PPJB and paid the full price of the building unit sold by the developer. However, the most perfect proof of ownership of an apartment unit is SHM and/or SKBG.