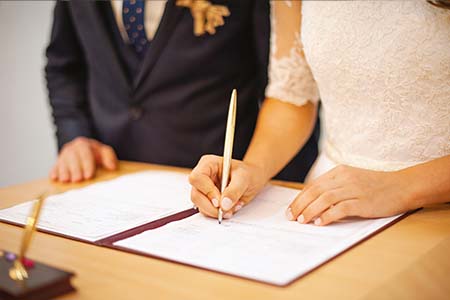 Some common problem involving inheritance law is determining the heirs or parties who are most entitled to inherit from the wealth of a deceased. The division of inheritance is indeed not a rare problem for families in Indonesia.

In Indonesia, marriage registration is carried out at the Office of Religious Affairs (KUA) for Muslim residents, while for non-Muslim at the Civil Registry Service Office.

Obligation of Marriage Registration Based on Indonesian Positive Law

Marriage must be recognized by the state. Article 2 paragraph (2) of Law No. 1/1974 on Marriage stipulates that every marriage must be recorded according to the applicable regulations. Provisions regarding marriage registration are regulated in Government Regulation No. 9/1975 on the Implementation of Law No. 1/1974 on Marriage.

The provisions regarding the marriage registration are applicable to Indonesian citizens and to foreign nationals conducting their weddings in Indonesia at their requests.

Article 37 of Law No. 24/2013 on amendments to Law No. 23/2006 on Population Administration states that marriages performed outside the territory of Indonesia must be registered with the competent authority in the country where the wedding is held or reported to the representative of the Republic of Indonesia  in that country within 30 (thirty) days.

Based on Article 107 of Presidential Regulation No. 25/2008, if the reporting period exceeds the specified period, an administrative fine will be imposed according to local regulations.

Normative marriage registration is not ruled as a condition for the validity of a marriage because the laws determining the legality of the marriage is the religious law and belief of the bride and groom.

Marriage registration is authentic evidence in case of problems in marriage, such as problem to determine the status of children born in marriage, and that in the case of divorce. Marriage certificates can be used as evidence to resolve such problems.

Marriage registration serve as a valid written evidence for litigating domestic matters in court, as well as for administrative matters of husband and wife and their children.

Although Law No. 1/1974 does not explicitly regulate sanctions or legal consequences if marriages held abroad are not registered in Indonesia, Supreme Court Circular No. 3/2015 states that “In the event of a marriage carried out abroad that is not registered at the civil registry service  office in Indonesia, the marriage is considered to have never existed.”

The juridical implications of unregistered marriage affect the verification of marriage; husband and wife; children born out-of-wedlock and for the assets that are made in the marriage.

Legal consequences of unregistered domestic and foreign marriages, include:

Based on article 43 paragraph 1 of Law No. 1/1974,  a child out of wedlock will only have a civil relationship from his/her mother and the mother’s family, while the same child has no civil relationship with the biological father and the father’s family. Likewise, in the case of registering a child’s identity in the form of a birth certificate, the birth certificate of a child out of wedlock only includes the name of the mother, while the name of the father is not listed in the certificate.

The Constitutional Court through Decision Number 46/PUU-VIII/2010 has stated that Article 43 paragraph 1 of Law No. 1 of 1974 is contrary to the 1945 Constitution if it eliminates civil relations between a child and with a man – who based on science and technology and/or other legal evidence is proven to have blood relations as the child’s father.

The Constitutional Court stated that Article 43 paragraph 1 of Law No. 1 of 1974 must be read, “Children born out of wedlock have a civil relationship with their mothers and mothers’ families as well as that with men  – who based on science and technology and/or other legal evidence have blood relations with the children as their fathers,  and the men’s  families”.

As a result of unregistered marriages, the legal relationship between husband and wife is unclear and vague in terms of the formation of marital property, as well as inheritance relationships. Thus,  there is no legal guarantee for the wife’s inheritance rights.

By law, a woman is not considered as a legitimate wife in terms of the distribution of joint property. She is  not entitled to a living and an inheritance from her husband if he dies. In addition, the wife is not entitled to joint property or other assets in the event of a separation, because the marriage is considered to have never exist before the laws.